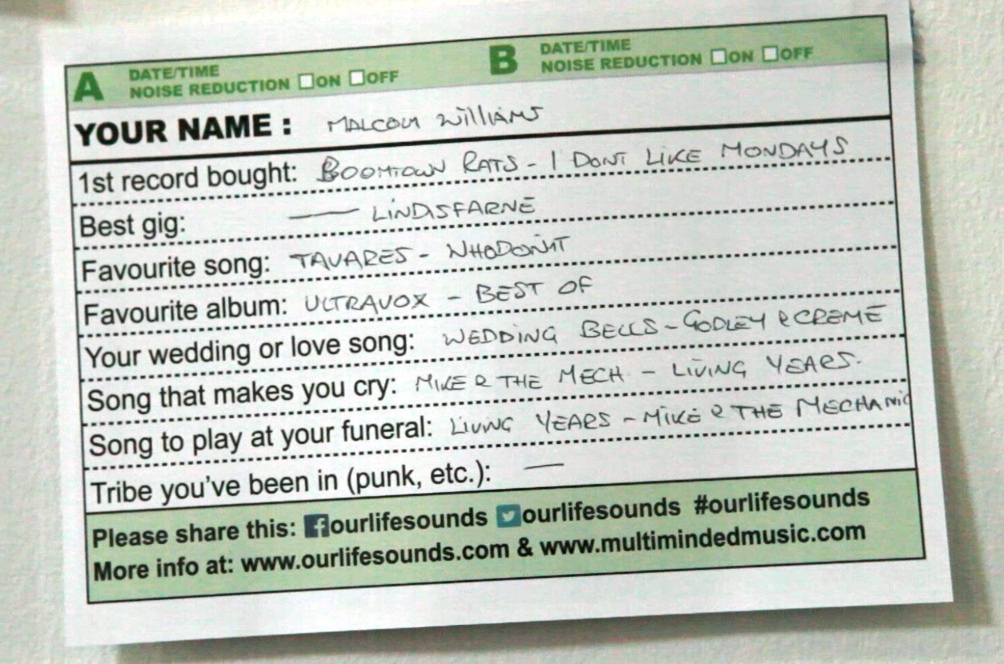 Concept Testing Of Our Life Sounds

Our Multiminded team took over the Toffee Factory for two nights for the Late Shows this weekend with an event called Toffee Factory Records. We decided to introduce our Our Life Sounds idea on the audience to test audience engagement and they loved it. People were literally queuing up at times to fill out their cards and stick them to the ever expanding gallery wall. We were also thrilled at how much time people spent reading other people’s entries and discussing them amongst themselves.

To kick the whole thing off we’d asked a selection of local DJs, many of whom run different kinds of music nights and clubs around the town, to share their Our Life Sounds choices. These appeared in a gallery wall right down one side of the gallery. These included legendary DJ Tommy Caulker from World Headquarters. Also Ray Laidlaw from the band Lindisfarne who runs music tours around the area.

We’d limited the number of questions we asked so they would all fit on a flyer like an old cassette box to give them a nostalgic mixtape feel. In the gallery you can see some photos from the event and lots more will be added soon. We will also be uploading footage from the event. We’ve only just opened social media accounts for this project ready for later but will also upload some preliminary snapshots on those channels too so Our Life Sounds has a presence ready way before the proper launch.

The following is a little taster video of the concept. But this is just in a simple presentation style. The video would be remade utilising our agency’s full infographics skills.